Skip to content
In relationships with other people, we participate in something greater than ourselves.

This post continues the series on transcendence in naturalism.  Part 1 introduced naturalistic transcendence, and part 2 covered nature as a source of transcendence.  Part 4 will delve into mind. 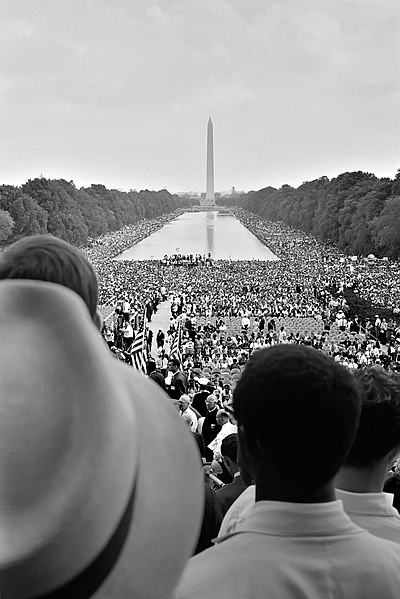 On August 28th, 1963, over 200,000 men and women descended upon Washington, D.C.  Had an alien observer looked down on this from orbit, it would surely have been a curious site: What a remarkable capacity this species has to form groups!

Such a distant observer might have compared it to other earthly sights, such as the buzzing of a beehive or the march of an ant colony.  Certainly they shared something in common.  Yet this would have missed that this collective unit was also a gathering of individuals.  Hundreds of thousands of unique personalities joined to demonstrate commitment to something greater than themselves: the ideal of justice.

It might not have been obvious to our alien anthropologist that the gathering expressed deep rifts in the community, frustration at the systematic disenfranchisement of an entire race.  It might not have been clear that the footfalls of each individual rang with suffering, and hope against all odds for something better.

We know better.  Our species has a deplorable capacity for cruelty, especially toward outgroups and deviants within-group.  At the same time, we also have the power to cooperate and achieve great things when we come together.

To belong to a group, to embody its goals, is to transcend oneself.

A society is more than the sum of its constituents; a group will emerges that moves in ways no single member may direct or predict.  It transcends the individual in both degree and kind.  At the same time, individuals participate in that greater movement, part and parcel of it, and may dissent as part of the greater process.

We are social animals, said Aristotle.  Nearly two and a half millennia later, it still rings true.  Our urge to form associations is bred into us by evolution.  Groups able to organize around common goals out-competed those who could not, and we are the genetic results of the more successful groups.

This is not always a rosy situation: groupishness is good for in-group cooperation, but also fosters nastiness toward other groups as well as deviants within the group.

Yet, for better or worse, we cannot deny ourselves.  We are tribal by nature.  And in taking part in groups, we reach toward something larger than ourselves.

Nor could we ever truly get outside the social, even if we tried.  Even a hermit in solitude, gazing across untouched wilderness, sees that wilderness through the eyes of a culture.  One continues to think in the language and categories of one’s society.  It is no more possible for a human to exist without culture than to exist without a physical body.  Culture is part of our very being.

This is not to suggest there is no such thing as freedom or individuality.  Each of us integrates diverse cultural streams in unique ways, and we can produce creative new expressions.  Yet there is no denying the fact that each free and unique individual is part of society, just as each wave is part of the sea.  Society is part of the human condition.

I chose the example of the March on Washington for several reasons.

First, it’s not overly optimistic.  The march protested problems that still persist today, problems endemic to the tribal nature of our species.

Second, it’s not overly pessimistic.   The march is widely credited with helping to pass the Civil Rights Act and Voting Rights Act.

Finally, it shows the care demanded by this form of transcendence (and indeed all forms) to affirm rather than negate the individual.  Communities involve individual sacrifices for the good of the whole, but must at the same time promote the individual interests of all members.

Through community we can reach not only outward to other people, but also backward to our ancestors.

By identifying with our predescessors, be they ancestors of blood, culture, or inspiration, we become aware of the shoulders on which we stand.  Those who came before can teach us about ourselves.  By appreciating their contributions, we can learn humility and gratitude.  By studying history, we can also learn their hard-earned lessons, including patterns we should not repeat.

Ancient ways, by virtue of having evolved over great spans of time, frequently embody knowledge we hardly suspect.  This is one reason why I advocate strongly for working with ancient myths rather than creating new ones.  Ancient myths evolved their forms by cultural selection over time.  They survived because they spoke to people across many generations, made sense of diverse challenges and calamities, and empowered multiple ways of life.  There is no reason not to try out new myths as well, but neither should we ditch old ones in our haste.  Ancestral traditions deserve our continuing reverence.

Through contemplating our ancestors, we come to know ourselves as beings in time.  We feel ourselves glints on a wave pushing across an ocean.

Beyond the human: A community of all beings?

The question of revering ancestors leads to another: how far back shall we trace them?  To the golden age of our favorite culture?  To the emergence of homo sapiens?  To the first life?  Or all the way back to the Big Bang?

Contemplating these questions, ancestry expands to include all of Big History.  Nature then appears in its aspect as community, a cosmic family.  Earth may become mother, sky father, and creatures cousins.

This reveals a characteristic typical of symbols: the deeper you follow them, the more they appear everywhere.  They blend one into the other in an endless web of meaning.

Finally, a word may be said about the moral potential of transcendence through community.  This can hardly be better expressed than in the Charter for Compassion, proposed by Karen Armstrong to serve like a Magna Carta for the world’s major religions:

The principle of compassion lies at the heart of all religious, ethical and spiritual traditions, calling us always to treat all others as we wish to be treated ourselves. Compassion impels us to work tirelessly to alleviate the suffering of our fellow creatures, to dethrone ourselves from the centre of our world and put another there, and to honour the inviolable sanctity of every single human being, treating everybody, without exception, with absolute justice, equity and respect.

I would only add that this principle goes beyond religion to include most secular societies as well.  Despite atrocities committed by both religious and secular groups, most all communities have compassion at their core.  Sometimes it is only a seed, and our job is to constantly water it in anticipation of its bloom.

The power to transcend ourselves through compassion, “to dethrone ourselves from the centre of our world and put another there”, is a basic human capacity.

Dealing with a Crisis

Crisis can bring out the best or the worst in us. Here are 5 ways to think more clearly and respond more effectively.

I was exhausted. The school year had ended at last, and the final day had been a particularly hot and busy one. After submitting grades, rearranging classroom furniture, and taking

How Mindfulness Can Defeat Racial Bias