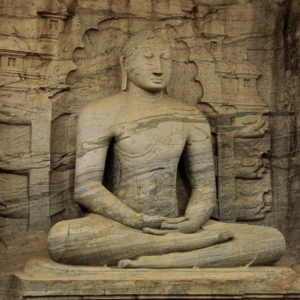 The following is an interpretive translation of the first Sutta of The Middle Length Discourses of the Buddha, which is known as the Majjhima Nikaya (MN 1). In the Pali, it is called the Mulapariyaya Sutta (Sutta is Pali, Sutra is Sanskrit). Bhikkhu Naanamoli and Bhikkhu Bodhi give the English title to this Sutta as, “The Root of All Things.” The Majjhima Nikaya is considered by scholars as some of the most historically reliable material in the Pali canon.

I want to explain what this translation is. It is an interpretive translation that attempts to take a 2,500-year-old oral tradition and turn it into a readable 21st century written work.

To those familiar with the original Pali writings, the obstacles to creating a readable 21st century written translation are numerous. I would like to touch on some of these obstacles for those interested in studying and possibly translating the Pali canon.

1. The first obstacle is that the sheer size of the material is overwhelming. Just the Pali canon alone, in the first complete printed edition, consisted of 38 volumes. This is just way too much material for the vast majority of people.

2. The second obstacle is deciding what material is actually from the historical Buddha and what is pious fiction. Most, if not all, of the Mahayana Sutras, fall into this pious fiction category. Even within the Pali canon, there are a number of works that were created after the Buddha had passed away, such as the seven books of the Abhidhamma.

One strategy to overcome this obstacle is limit yourself to the Pali Suttas and the Chinese Agamas. These would also be the most useful for lay people.

3. The third obstacle is the oral format of the original texts. The spoken word is different from the written word in a number of ways. Spoken language tends to be full of repetitions, incomplete sentences, corrections, and interruptions.

4. The fourth obstacle is the excessive use of repetition. This is one of the most common complaints of those who try to read the Suttas. It makes reading them tedious and complicated.

The best strategy to overcome this obstacle is to eliminate excessive use of repetition. There are a number of ways to do this, such as rearranging the material, abridging the material, or summarizing parts of it.

5. The fifth obstacle is the language gap. The difference between ancient Pali and modern day English is huge.

The strategy to overcome this obstacle is multi-fold. First is to translate all Pali words into English, with no transliterations. This means not using Kamma, Dhamma, Sutta, Nibanna or their better known Sanskrit equivalent. Secondly, this is an Interpretive Translation, with the primary aim being readability. This means using a combination of translation styles, including dynamic equivalence and paraphrase. The final product will not be a translation of what the Buddha is said to have said, or even what he meant (only he knew that). Rather, it will be a translation of what the translator thinks the Buddha might have meant and said if he were to speak it today in modern English.

6. The sixth obstacle is the cultural gap. This gap is as big, if not bigger, than the language gap.

The strategy to overcome this obstacle is multi-fold. One strategy is to write in a modern idiom and use dynamic equivalents.

For example, Nibbana (Nirvana in Sanskrit) is translated by me as “Inner Peace.” The Pali-English Dictionary tells us that Nibbana literally means “to blow” out. Not very helpful in English. Nyanatiloka, in his Buddhist Dictionary, gives the meaning as “extinction.” Which really gives the wrong impression. It is, as The Princeton Dictionary of Buddhism explains, referring “to the extinction of the three poisons.” In other words, the end of suffering (Dukkha). Hence, my choice of “Inner Peace.” An alternative possibility would be “Total Inner Freedom.”

7. The seventh obstacle, related to the cultural gap, is the legendary, mythical, and metaphysical material found in the texts. In a secular age, gods, ghosts, heavens, hells, and other realms are not only implausible but to many, they are simply unbelievable.

The best strategy to overcome this obstacle is to eliminate all legendary and metaphysical material, except karma and rebirth.

8. The eighth obstacle is the gender-biased language in the original material.

The strategy to overcome this obstacle is to use gender-neutral language. I distinctly dislike the alternating pronouns strategy, alternating “he” and “she.” The third person plural is one option, another is to turn the passage into the first person. This has the added benefit of making the passage less distant and archaic.

9. The ninth obstacle is the glorification and exaltation of the Buddha, including exaggerated claims and honorific titles.

One strategy to overcome this obstacle is to eliminate exaggerated supernatural claims about the Buddha, and to eliminate honorific titles like the Blessed One, Exalted One, etc. It’s hard to believe the Buddha would have used them of himself.

Evaluating Others: Checking Our Bias