We all have baggage. Some of it is good happy baggage that reminds of us pleasant times spent with people we love. And some of it’s pretty crappy. Some people have so much crappy baggage and garbage that they can’t find the good stuff or even remember that there is good stuff in among the crap somewhere. At some point, it just all seems like crap.

All this baggage is difficult to carry around. Anyone who has tried to maneuver more than 1 piece of luggage onto a plane or train can attest to the value of travelling light. Our emotional baggage is no different. It can slow us down and prevent us from moving forward into situations that could be good for us.

I was stalked once, by a man who shall henceforth be referred to as Poopyhead Stalker Boy. I was dealing with the emotional fall out from that when I started dating my husband. When my husband asked me to marry him, I knew I had to do something about my PTSD so that I didn’t bring that baggage into our marriage. It wouldn’t be fair to my husband or to me. So I let it go, both symbolically and literally.

One of the things I did was see a therapist to help me deal with the trauma of that relationship. More than anything else I did, that helped me the most. But this is a post about getting rid of old baggage. And while the therapy helped me a lot, I still felt like I was carrying around the negativity of what had happened with Poopyhead Stalker Boy. I needed to do something more. I needed to choose to let it go.

I decided to celebrate Tashlich that year which is part of the Jewish Rosh Hashanah tradition. I’m obviously a Humanist and an atheist and I don’t normally do religion. But part of my extended family is orthodox Jewish so I am familiar with the holidays. Tashlich occurs on the first day of Rosh Hashanah. The idea is to cast away your sins into a body of water by actually throwing something symbolic into the water. I used that holiday to symbolically throw away the remains of my relationship with Poopyhead Stalker Boy so that I could move forward without the memories and the trauma that went with them.

Where I live, the river is about 1 mile across. If you throw something into it – you aren’t getting it back. It’s well and truly gone. I decided to throw away a necklace. The pendant was a lovely little heart made out of lapis lazuli set in silver. It was a gift from Poopyhead Stalker Boy and I hadn’t been able to get rid of it. It wasn’t the necklace’s fault that the person who bought it was a poopyhead. Still, I couldn’t bring myself to wear it because it was so painful to think about. I was stuck between intellectually knowing I should get rid of it and not having the actual courage to let it go. In the meantime there it sat in my jewelry box triggering my PTSD every time I went to get something. I still get a pit in my stomach thinking about it. 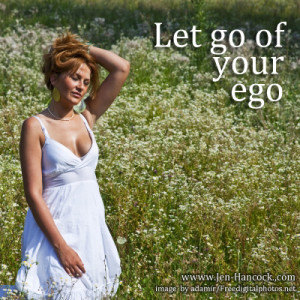 It had to go. I needed to let it go. I knew if I could part with that, I could let go of the emotional baggage that was still haunting me.

On Tashlich I went down to the river by myself. I told the necklace how glad I am that I’m no longer involved with that man and how I didn’t want to think about Poopyhead Stalker Boy ever again and that I would miss the necklace. Then, I threw the necklace into the river. It was gone and even if I wanted it back – I couldn’t get it back. And that felt great! It was like a wave of relief. I wasn’t a prisoner any more. I had a choice and I could let go of things if I wanted to. And I did. And things have been getting better ever since.

What happens when you let go

When I was young and in college I used to work in the record industry. One of my friends was a representative for K-Tel records, which put out compilation albums. But they did have some original talent. One of their acts was a group called Celestial Navigations, headed by the actor Geoffrey Lewis. He told stories set to music. The stories are really awesome and infused with pop psychology imagery taken from the teachings of the Church of Scientology. Don’t let that bit of information stop you from checking out their work. I still love listening to them and even got to see them perform live once.

The reason I bring this up is because whenever I have to let go of baggage, I think of Celestial Navigations’ story – The Valley. In it, a man comes to a valley and realizes, he needs to let go of things. There is no reason to take all his stuff with him. So he looks at the box of his childhood memories and lets it go. He opens a box full of beauty, and pushes it aside. As he does so – he grows taller and a grey film washes off of him. He is stronger and can see and experience things more clearly now. The more he lets go the easier it is and the more vivid his experience becomes.

This story has helped me through many a dark time. I associate letting go with growth and strength because of this story. Whenever I need to let go of something, I play this “song.” It’s my way of reminding myself: its ok to let it go. In fact, it’s good to let things go sometimes.

Don’t throw everything away

Perhaps the most important part of The Valley is that the protagonist doesn’t throw everything away. He keeps a box full of tools and a flute because those are the objects of the future. He needs them.

You are who you are today because of what has happened to you in your past. You can’t move into the future without acknowledging that. What you have learned emotionally from your experiences are the tools that will help you build your future. But that doesn’t mean you need to hold onto the baggage of the past to access those tools. All that does is keep you living in the past.

If you want to move into the future fully, you have to let most of it go. The good news is that you aren’t going to lose who you are or what you’ve learned by throwing away a necklace or a box of memories. What you gain by throwing away your baggage is clarity and a better sense of self. Letting go is ok and you can move forward. If you need to throw away a box of old memories or a necklace to get there, go ahead and do it.

Symbolic actions have power. I see no problem as a Humanist tapping into that power to help me deal with the difficulties of life. If a ritual contains symbolism that is meaningful to you personally, go ahead and do it. You don’t have to attach supernatural baggage to it. The symbolism is what is important.

2 thoughts on “Getting rid of old baggage – some of it anyway.”